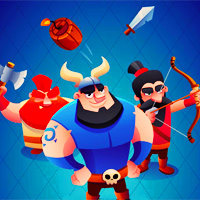 Vikings Royal Battle is an online HTML5 game, it's playable in browsers such as safari and chrome. You can play the game on smartphones and tablets (iPhone, iPad, Samsung, Android devices and Windows Phone). In the game Vikings Royal Battle, you will have the opportunity to encircle the Viking Age and play as a Viking. Vikings are known for their ferocity in battle. There is evidence that Viking warriors sometimes become violent and carry out near-barbaric attacks regardless of all dangers. Their behavior is very scary, and they have a strong desire to fight. They don't know what fatigue is, nor are they restrained by the terror on the battlefield, they will use his superhuman physical strength to continue to fight until the end of the battle. Your mission is to fight to the last minute, are you ready? 95.68% of 3 players like the mobile game.