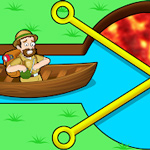 Pull Him Out is an online HTML5 game, it's playable in browsers such as safari and chrome. You can play the game on smartphones and tablets (iPhone, iPad, Samsung, Android devices, and Windows Phone). Egypt has many mysterious treasures buried deep underground. Many people become treasure hunters in order to find these treasures. Nick is inadvertently attracted by an unknown map in a box. He hopes to crack the secrets on the map and find the legendary treasures. Nick came to Egypt alone. Although he did not find the treasure, he was hit by a mummy coffin. The mummy pharaoh inside told him that Nick must solve some puzzles to find the treasure. Are you willing to help Nick solve these puzzles? 87.26% of 35356 players like the mobile game.