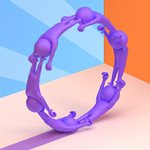 Join Scroll Run is an online HTML5 game, it's playable in browsers such as safari and chrome. You can play the game on smartphones and tablets (iPhone, iPad, Samsung, Android devices, and Windows Phone). Join Scroll Run has proven to be the most interesting new arcade game this year, with addictive gameplay and 3D art style. In the game, you will play a team leader, and you need to recruit as many teams as possible. Members, only when your team is large enough, you can climb over the blocking wall one by one. It is worth noting that there are some terrible obstacles on the platform, you need to avoid them to keep the number of team members. 95.68% of 2 players like the mobile game.