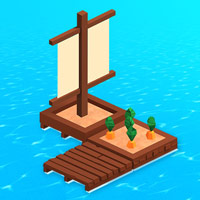 Idle Arks Build At Sea is an online HTML5 game, it's playable in browsers such as safari and chrome. You can play the game on smartphones and tablets (iPhone, iPad, Samsung, Android devices, and Windows Phone). Idle Arks Build At Sea is an engrossing casual game. You may have heard of the story of Ark. As we all know, it was built by a man named Noah to save his family from the upcoming flood. Now you are going to have a taste of Noah's work. First of all, you need plenty of woods as raw material. Besides, you need helpers as many as possible. Explore the game and see where the ark you build will lead you! 95.68% of 2 players like the mobile game.