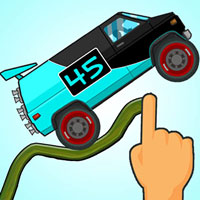 Draw The Hill is an online HTML5 game, it's playable in browsers such as safari and chrome. You can play the game on smartphones and tablets (iPhone, iPad, Samsung, Android devices, and Windows Phone). Draw The Hill is an exciting driving game. But your task is not to drive a car in this game, but to draw a route to set the car's travel route. The car will drive on the route drawn by you. In addition, you also need to avoid some obstacles in the air. It is worth noting that don't forget to collect gold coins to get a higher score! The car will run on the line. Lead it to avoid the pipes, get coins. Go as far as well, we will record your score. 81.93% of 5539 players like the mobile game.