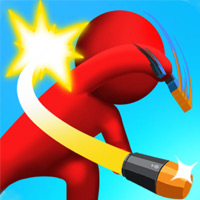 Draw Bullet Master is an online HTML5 game, it's playable in browsers such as safari and chrome. You can play the game on smartphones and tablets (iPhone, iPad, Samsung, Android devices, and Windows Phone). n the famous action movie Wanted, there is a scene that shocked the audience. The killer played by the protagonist cleverly avoided obstacles with a bullet capable of turning and successfully killed the villain. Similar scenes have been appeared repeated in the movie. Today, in this interesting shooting game of Draw Bullet Master, you will also have the opportunity to kill the enemy by turning bullets like the protagonist in the movie. Your task is to draw the correct bullet trajectory. There are a total of 10 addictive levels in the game! 95.68% of 2 players like the mobile game.