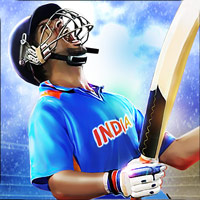 Cricket Champions Cup is an online HTML5 game, it's playable in browsers such as safari and chrome. You can play the game on smartphones and tablets (iPhone, iPad, Samsung, Android devices, and Windows Phone). Cricket Champions Cup is a sport-related game. The rules are very simple. Cricket is a sport based on hitting, pitching, and catching the ball. The attacking player is the batsman, and only two people can be sent off the field each time during the game, striving to win high scores. On the defending side, 11 players dropped off the field at the same time for the game. One of the pitchers was responsible for throwing the ball into the wicket behind the batter, trying to drive him out of the game. After the attacking side's betting round is over, the two teams will Offense and defense are reversed, and the team with the higher score is the winner. If you are a fan of such sports, don't miss this game! 94.44% of 47 players like the mobile game.