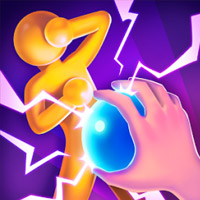 Balls Throw Duel 3D is an online HTML5 game, it's playable in browsers such as safari and chrome. You can play the game on smartphones and tablets (iPhone, iPad, Samsung, Android devices, and Windows Phone). If you just think Balls Throw Duel 3D is a new arcade game, then you will miss a very interesting decryption game. In this magical game world, you need to throw the red ball to the designated position. At the same time, the enemy will also throw the green ball into the area. You need to think about occupying more territory and destroying those enemies who are trying to occupy your territory. This is not a simple game. According to some principles and principles in the geometry Method, maybe you can complete this task in a shorter time! 93.75% of 10 players like the mobile game.