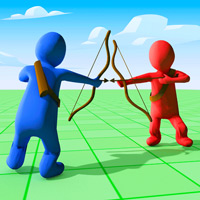 Archers.io is an online HTML5 game, it's playable in browsers such as safari and chrome. You can play the game on smartphones and tablets (iPhone, iPad, Samsung, Android devices, and Windows Phone). Archers.io is an engrossing casual game. As a kind of sportive or athletic art of shooting, archery carries with it a long history with rich culture. However, arrows have been used for battles most of the time. Behold, there is another war breaking out among the archers in this game, in which you need to recruit the grey stragglers from the very start to grow your team step by step toward an invincible army. You will become No.1 as long as your team is enough strong. Tap to grow your team now! 95.68% of 2 players like the mobile game.